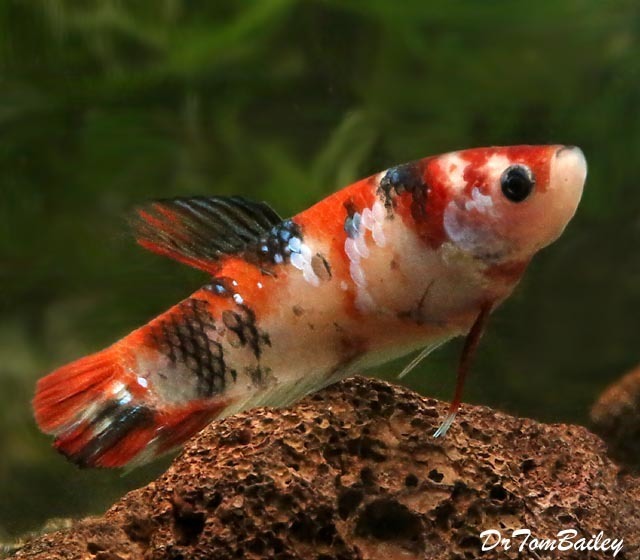 Above: a young premium quality Female Showa Koi Betta swimming in one of our aquariums, when one of us snapped this picture.

Comments: This is a premium quality pet fish, and we never see Premium Fish like this in any of the live fish stores or in the online stores that we visit.

Origin: Their ancestors originally lived in central Thailand, which is a country in Southeast Asia, but now Betta Fish are now found living in fish bowls and aquariums throughout most of the world.

Maximum Size: In aquariums Female Betta Fish can grow to be about 2" long, including their tails.

Behaviors: Betta Fish are not active swimmers and are rarely aggressive to other species of fish, but males are very aggressive to each other, flaring their fins and fighting, often to the death of one.

Sometime females have rather mild quarrels.

You will often see Male and Female Betta Fish swimming up to the surface of the water, where they take in some air.

Later you'll see them release a bubble or two, and then return to get more air.

They must always have access to the air at the water's surface.

Compatibility: Female Betta Fish can live together in an aquarium provided the aquarium is large enough so the females are not crowded together.

It's also good to have a few other fish like White Clowds that act as a buffer between the Female Bettas.

Temperature: Like the Males, Female Betta Fish can live pretty well from about 70 to 85 degrees F., but they're probably most comfortable at about 75 to 80 degrees F.

Feeding: Small Premium Pellet Food and Freeze Dried Blood Worms. Be very careful not to feed more than they will eat, or the uneaten food will quickly contaminate the water.

It's best to gently drop one pellet onto the water's surface. Be sure the Betta Fish sees the pellet, swallows it, and does not burp it up. Then you might try another pellet.

Three pellets at one feeding is about the max. Sometimes Female Bettas will eat more, but it's always better to be careful and be sure not to feed more than they can eat.

Probably best to feed them 2 or 3-pellets twice a day.

They do not need much food, because they're lazy fish that do not expend much energy.

Recently DrTom has been feeding his Betta Freeze Dried Mosquito larve, and it seems to even a better for Betta.

Water Conditions: Betta Fish seem to be tolerant of a wide range of water conditions. Probably a pH of about 7 with moderate hardness is best.

Most water in the US has a higher pH and is harder but seems to be OK, so it's probably best NOT to adjust the pH or the hardness of the water.

Aquarium Size: It's best keep female betta fish in an aquarium. It's important to do a partial water change of about 20% of the water at once twice a week.

Decor: Female Betta fish living in an aquarium do not need gravel, and a layer of gravel more than 1/4" thick will often fill with bits of fish food and waste from the fish, and so become contaminated.

It's also important to have a piece of Lava Rock. Click here to learn more about using Lava Rocks in aquariums, fish bowls, and ponds.

Aquarium Filter: If you decide to keep a Female Betta Fish in an aquarium, it's best to use the proper size Bio-Wheel Filter.

For example the Penguin 200B Filter is the proper size for an aquarium with about 15 to 30-gallons of water.

Males and females are usually labeled as such and sold separately.

Breeding: A Male Betta Fish builds a bubble nest. The Female lays floating eggs that the male cares for.

Popularity: Betta Fish are a long-long time favorite, and are probably the most popular pet fish.

The scientific name of Betta Fish is usually given now as Betta "splendens", and the quote marks indicate that this scientific name is probably a simplification that is not entirely true.

As is the case with many aquarium fish, Betta Fish are hybrids, whose ancestors include Betta splendens, but also include Betta imbellis and most likely at least one more Betta species that's probably undescribed at this time.

Don't worry about Bettas being hybrids. They're wonderful pet fish.

Variations: There are many-many variations of color, pattern, and fin shape.

Click here for a lot more information about keeping and caring for Betta Fish, including a picture gallery.