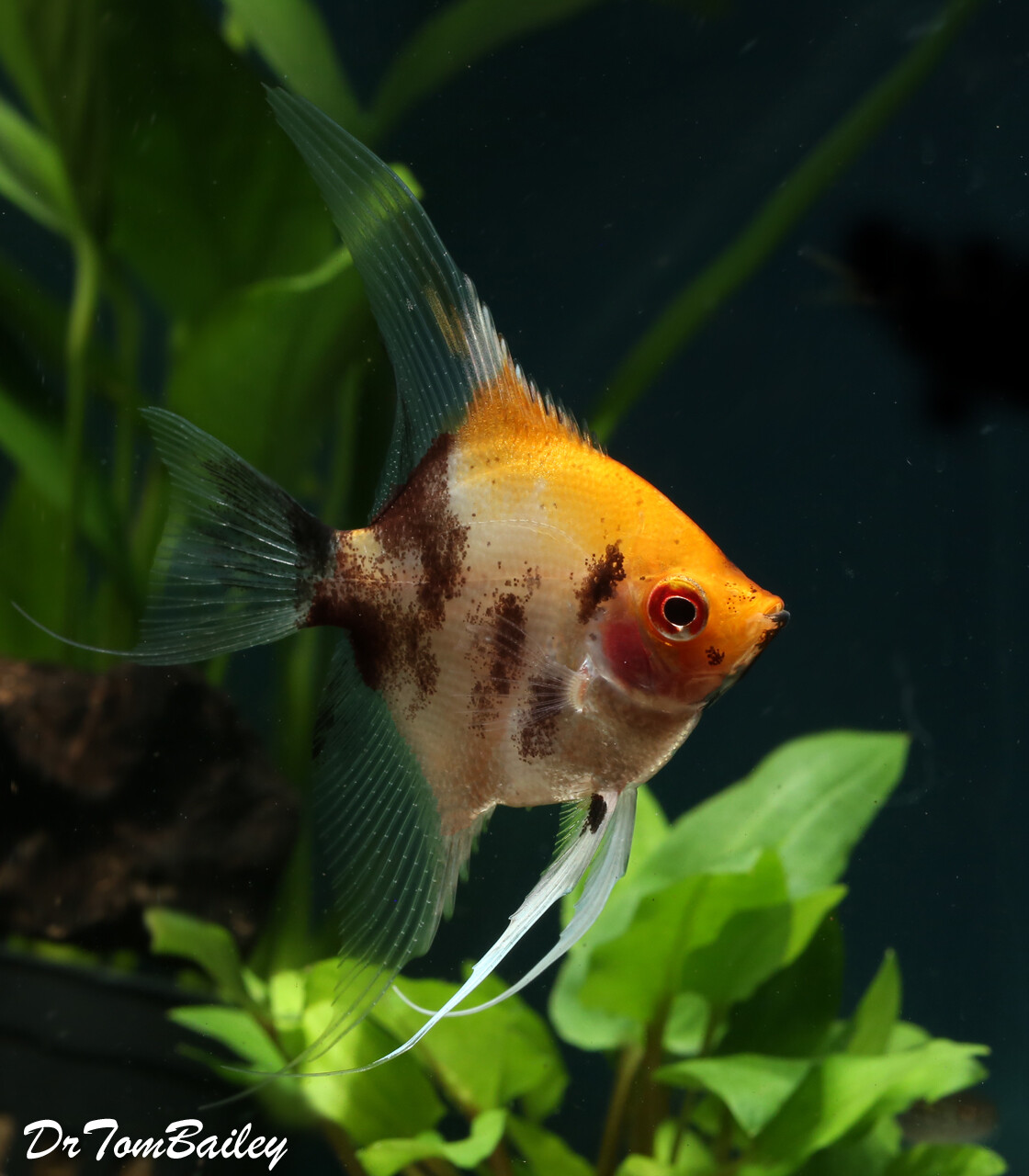 This Angelfish is a cross between a Blushing Angel and a Koi Angel, making one of the most beautiful types of Angelfish.

Ruby Head Koi Angelfish are very rare, but sometimes we have a few of them.

They are also very hardy and energetic. Highly recommended.

Comments: This is a Premium Pet Fish, and we never see Premium Angels like these in any of the live fish stores or in the other online stores that we visit.

Origin: Angels are very uniquely shaped fish, and probably for this reason they are one of the most popular aquarium fish.

But Angels are now found living in aquariums throughout most of the world. There are many color varieties available in this store.

Unless they are pairing off, spawning, or tending to their eggs or babies, then they are aggressive. A pair will work together to attack other fish that come too close.

Water Conditions: Angels seem to be tolerant of a wide range of water conditions. Probably a pH of about 6.5 to 7 with low hardness is best.

Most water in the US is different but seems to be OK, so it's probably best NOT to adjust the pH or the hardness of the water, unless you're trying to breed your Angels and raise the babies.

Aquarium Size: It's probably best to house these fish in at least a 40-gallon tank, when they're young and small, but eventually they'll need to live in a larger and taller aquarium.

A really big aquarium is better. DrTom has an 80-gallon aquarium that's about 24" tall and just about perfect for big Angelfish.

Keep at most one Angel per 3-gallons, when they're small. Larger Angels need up to 10-gallons per Angel, and older huge Angels need even more water per Angel.

Live Plants are beautiful, improve the water quality, and are enjoyed by Angels and baby Angels. Water Sprite and Java Ferns are very good plants for Angels.

Click here to shop in this store and buy Aquarium Plants.

A Penguin 200B Filter in an aquarium with 20 to 30-gallons of water is ideal for very small Angels, and a Penguin 350B Filter is the right size for a 30 to 60-gallon aquarium.

Gender: It's usually easy for DrTom and his brother, Nevin, to tell the males from the females, even when they are young, but long ago they raised millions of Angelfish.

When a young group of Angels is raised together, the males soon become the bigger fish and joust more aggressively with each other.

Breeding: It's best to raise up a group of 8 or more young Angelfish. By the time they're 3.5" to 4" tall, the males will begin to seriously joust with each other.

Eventually there are a few dominant males, and when they are about 5" tall, they will pair off with a female and begin to protect an area, where they will soon lay sticky eggs on the side of the aquarium or on a filter tube or on the leaf of a plant.