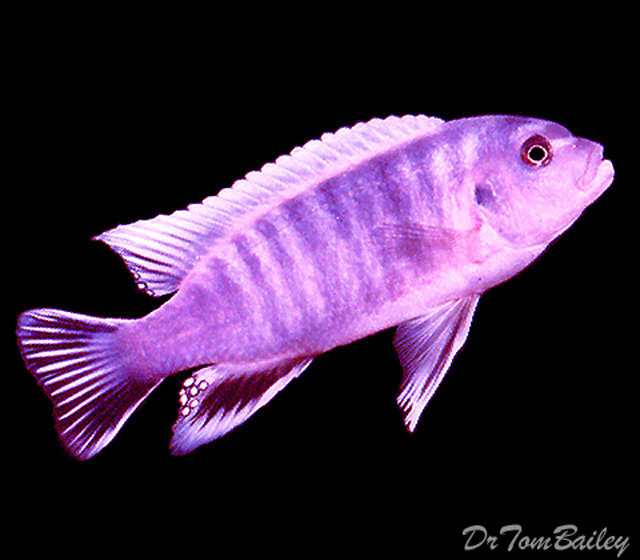 As mentioned in the Name above, this fish is an Mbuna, which is a large family of fish, whose ancestors lived in Lake Malawi.

Long ago we, that's DrTom and Nevin, imported fish from Lake Malawi that had been collected by Stuart Grant's company.

We were unpacking one shipment that contained two single-bagged fish that we'd never seen before. Mr. Grant knew we resold most of the fish we bought from him, but we kept some and bred them.

This meant that our tank-raised fish would somewhat compete with Mr. Grant's wild fish, but he was a very nice man, and sort of supported our breeding efforts. Later we found out that he was breeding some fish and building a rather large facility to breed more.

Anyway the two fish, one male and one female, that he'd sent to us, were intended for us to breed.

As we were unpacking the shipment in walks Bob Graf, who was a local of breeder of fish. He looked at the unidentified male and female and said that he love them.

So I sold them to him for a fair price, but he was kind of concerned that they had no name. They were new and unidentified. Even more they probably had not been given a scientific name.

Kind of in jest, I pompously declared them to be Pseudotropheus grafi, named after Bob Graf himself. He seemed to be very pleased, and that made us happy too.

But later we found out that some scientists and aquarists thought we were making fun of them and their emphasis on scientific names. They didn't like it and said the name, Pseudotropheus grafi, was not valid! Well we thought, what the heck, we'd had some fun, and we thought that Bob and his wife had enjoyed it too.

In the following months Bob did spawn these Grafi Mbunas and sold some back to us, and we sold them all over the world, which was more fun than usual, because we'd named them, and to us it's all about fun and enjoying the fish.