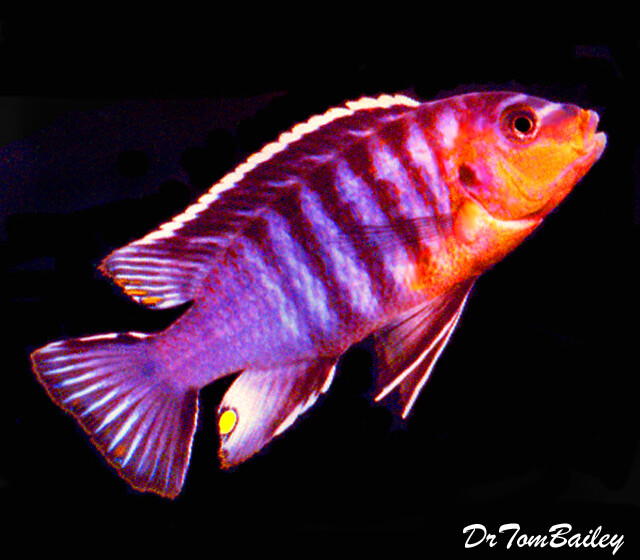 As mentioned in the Name above, this fish is an Mbuna, which is a large family of fish species, whose ancestors lived in Lake Malawi.

Long ago we, that's DrTom and Nevin, imported fish from Lake Malawi that had been collected by Stuart Grant's company.

In one shipment he sent us a pretty young male Mbuna. He also sent a note, saying they'd caught just one male. He liked our pictures and hoped we'd take a nice picture of this fish, and his collectors would find more for us to sell.

I took the picture, shown above, but I think he never did find more.

Some aquarists thought this fish was a Red Faced Macrophthalmus, but we could easily see the differences.

A very nice young lady, named Renatae, worked in a business near our business. She visited us once in while to look at our fish. We made it a rule that nobody like her ever got in, but all the young guys agreed that she was very good looking and very friendly, so we just had to let her in.

I was sort of against this sort of special treatment based on appearance, but I was also a young guy then, so I agreed to let her in.

She fell in love with the single male that Mr. Grant had shipped to us. I told her that if she bought a 30-gallon aquarium with a sturdy stand, a good filter, good heater, etc. that I would give her the fish.

She bought the equipment, and that gave me an opportunity to coach her on how to set it up, and get it just right. She did, and I gave her the fish.

Apparently the fish did very well, but she wanted to know what it was. I told her it was an unidentified Mbuna Cichlid from Lake Malawi in East Africa, which seemed very exciting to her.

But she wanted me to help identify the fish. So finally I said it was new to science and had no name. So by powers invested in me, I declared the scientific name to be Pseudotropheus renati, in her honor.

We talked about what that meant, and she seemed very pleased, and all of us thought it was fun too.

But once again the scientists and advanced aquarists thought we were messing with their scientific names, and criticized us for it. Oh well we thought, what the heck?