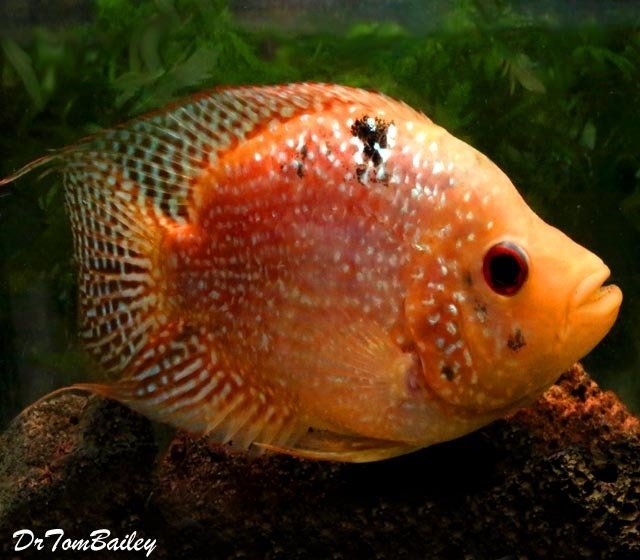 Scientific Name: Flowerhorn Fish are hybrids between various species from the group of fish that was previously known as Cichlasoma.

More recently Cichlasoma has been split into many groups.

Comments: These beautiful hybrid fish are the result of cross breeding various Cichlasoma species such as Herichthys cyanoguttatus, which is the Texas cichlid, plus C. trimaculatus, C. festae, the Jingang Blood Parrot, which is itself a hybrid of other Cichlids, and perhaps other species too.

The best quality Flowerhorn Fish have been produced by fish breeders, who are eager to produce the best show quality fish.

The Flowerhorn Fish has gone through several generations of selective cross breeding to capture the best characteristics of various different species.

Most breeders are striving to produce Flowerhorn Fish with bigger nuchal hump on the forehead, better coloration, bolder black markings on the body (which at times resembles Chinese characters), more elegant fins, and deeper body.

But neither chemicals or genetic engineering have been used so far to improve on the traits or characteristics of the Flowerhorn.

Appropriate Home: This fish is very hardy, and can endure water conditions that are not suitable for some types of aquarium fish.

Their hardiness is one of the big reasons that the Flowerhorn is enjoyed by many Tropical Fish hobbyists.

The ideal water probably has a pH in the range of 7 to 7.8 with water temperature ranging between 75 and 80-degrees F.

If your aquarium water is cooler, you will need to warm it with a conventional aquarium heater.

Eventually an aquarium for a Flowerhorn Fish should contain at least 120-gallons of water.

Compatibility: As Flowerhorn Fish are very territorial and very aggressive. They usually will not tolerate other fish, and will often eat smaller fish that fit into their mouths.

Some aquarists have said that they can play with their Flowerhorn Fish, but instead of playing the Flowerhorn is probably trying to get rid of what it sees an intruder, your hand.

Recommended Diet: Flowerhorns are not picky eaters, and need lots of food. We recommend pellet food made for cichlids and sold in many stores where pet fish are sold.

We advise feeding them at least twice a day and three times is probably better.

Size and Lifespan: Flowerhorns will quickly grow to be over 12-inches long, and some have grown to be over 16" long.

We hope you have enjoyed reading these comments.